Day 2 of my swim to Namu left me much further from my intended destination than I had originally envisioned. This swim was proving to be much more difficult than I had anticipated; not just because of the water temperature, but also the currents.

That evening my crew and I had some serious decisions to make. A few members of my crew had journeyed further down Fisher Channel toward the mouth of the Burke Channel which is just north of Namu. The water temperature had dropped another degree from 9C to 8C – a serious concern for my medical crew members.

I knew the Burke would be the most challenging part of the swim with the speed of the current and the debris that is often washed through it. Much of that could be managed though, as the crossing was just over 3 kilometres and would take about 1 hour to cross. If we were to leave just before slack tide we would land on the other side of the Burke just after slack. I wasn’t anticipating however, to swim in 8C water; and I also didn’t know at what point down the channel it had changed from 9 to 8C.

My crew and I had 3 options to choose from:

I chose to swim to Namu committing to return next summer to battle the Burke later in the season when the waters are not as cold.

My crew and I headed down Fisher Channel that morning and crossed the Burke by boat. I had a good look at the Channel as we crossed it, visualizing what my swim would be like next year.

Don piloted the boat to a beautiful beach between two islands at the tip of the Burke. I jumped of the boat onto shore, removed my clothing and shoes, and entered the water. I was pleasantly surprised that it was not freezing cold. I was prepared for 8C for the first hour of my swim but I think it was just above 9.
The water was so crisp and a clear – beautiful. Everything looked so  alive. There were hundreds of little moon jellies, so many I was worried I might swallow some as swam. I swam a few strokes around to the tip of the little island and then paused to look at the breathtaking scenery. There are no swims as beautiful as those I do in Heiltsuk waters in the Great Bear Rainforest.

As I moved through the water I was aware of how clean it was, and I continued to see the moon jellies along my course. My kayakers, Pam and Corey each paddled beside me and my escort boat off to the side. The sky was clouded over, but  didn’t matter. It somehow made it seem even more beautiful.

We hugged the coast watching ahead for a small island on which I would land, Kiwash. The island was directly in front of Namu Harbour and Wirlwind Bay where the tiny town of Namu rests. It was about 4 to 5 kilometres from where we started.

As I swam away from the Burke Channel and began to cross the mouth of Namu Harbour the water changed. It was no longer crisp and clear and it had a funny taste. The moon jellies were gone and there was no other life present that I was aware of. The water was brownish and tasted dirty. I altered my crew.

Corey suggested that I remove myself from the water, but I knew that it wouldn’t take long for me to reach Kewish Island. I  pressed on. As we approached the island I asked my crew, with the exception of Pam, to go ahead and look for a place where I could land. I had been told there was a tiny beach on side of the island facing Fisher Channel. I wanted out as quickly as possible.

My crew rounded the corner of Kewish Island. I could no longer see them; it was just Pam and I, alone in Fisher Channel. We were close to the shoreline and I could see one of the boats ahead in a small bay. I let Pam know I was fine and she too paddled a head to prepare for my landing. It was right at the point when she disappeared into the small bay that it happened – it touched me. I don’t know what it was, where it came from, or how long it was there, but it touched me. Something very smoothly brushed-up along my arm as though it was petting me.

I paused, looked around, and then swam on.

When I arrived in the bay I could see my some of my crew standing on the shore on the rocks. I knew then that it was going to be a difficult exit. Walking out of the water after swimming for a few hours can be a bit of a task; walking out on slippery rocks… lets just say it’s not easy.

I looked for the best spot to get out. There wasn’t one so I made my way to shore and began to exit the water. After a few steps I fell backward onto the rocks. I have no idea how I managed to not get hurt. I looked to the land again to find another spot. I opted to walk up alongside a very large rock which I would use for balance. I slowly walked across the rocks until I was fully out of the water.

I did it. I landed in Namu Harbour. My next step was to return to the boat then head to the tiny town to experience it first hand. 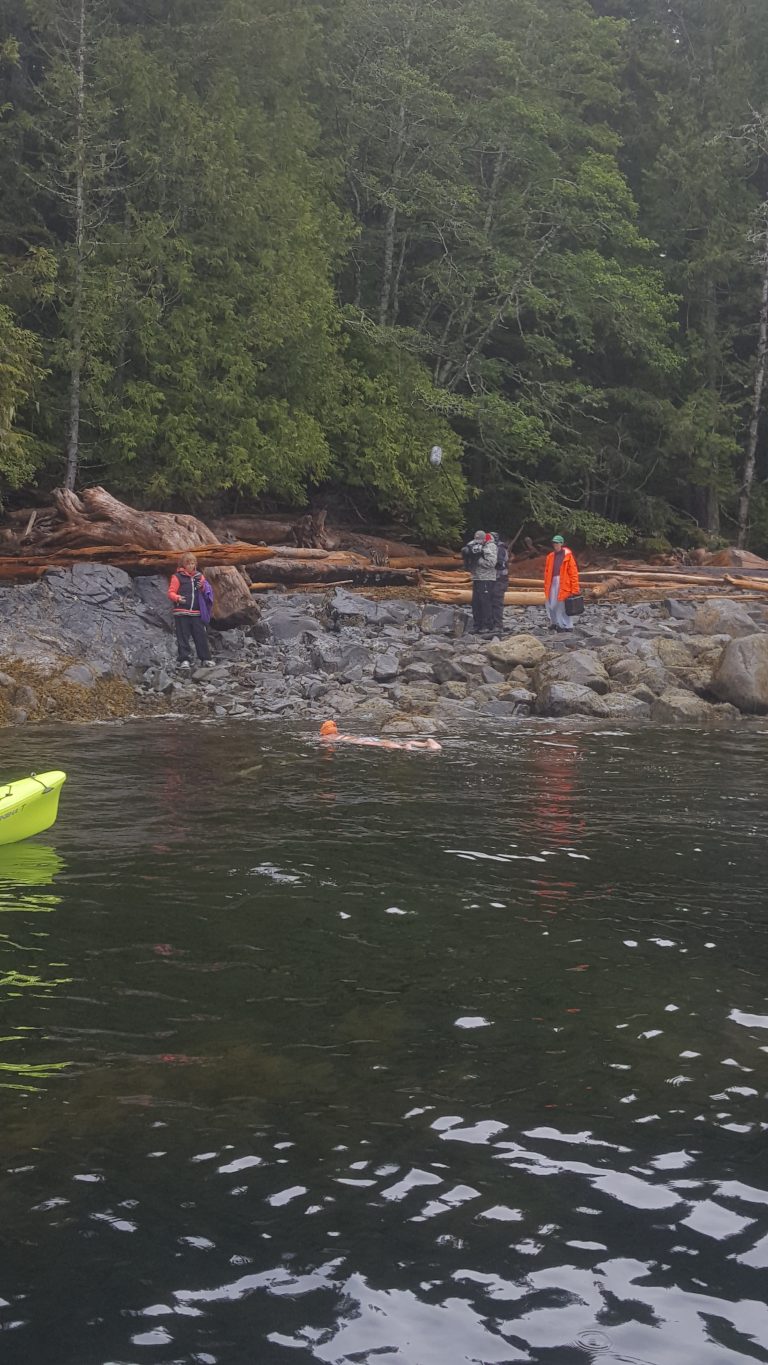